an oil on canvas painting, depicting two revolting figures, with distorted bodies, sharklike teeth and bulbous eyes, one with his left arm up, his hand a fist in a revolting gesture, a grim mask-like face is looking over the right shoulder of the other figure 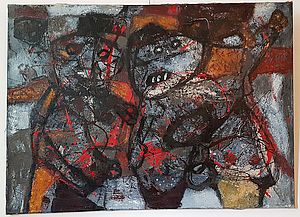 by it's appearance, technique and provenance, but no signature found, we believe it to be created by, but we only can attribute it to the famous Dutch poet and artist:

condition: not framed, two torns to the canvas

Lucebert made experimental art in naive and satirical form. Demonlike creatures were often the main characters of Lucebert's painting Lucebert was a Dutch painter and poet, who made spontaneous art and revolutionary poetry. He propagandized revolution, re-evaluation and new beginnings. He used his art to express his deep beliefs and desire to change the world. His art was political, social and profound. He was a man of faith and he relied on religion and his personal spirituality in challenging times. Growing up in poor conditions and struggling as an artist made him stronger, smarter and braver. He combined poetry and painting. Lucebert was a member of the CoBrA group and he played a leading role in experimental poetry in the fifties. 1934. The nine year old Bert Swaanswijk is confronted with and is witness of the awfull event of a big riot, the Jordaan Oproer, the insurrection of 1934, when the Amsterdam communist party, soon joined by a bigger part of the population, started protesting against the lowering of the unemployment benefit. The riots started in the Jordaan area, where the boy Bert lived, but spreaded in the whole city and lasted for days. The Amsterdam police was not able to stop the uprising and the mayor of Amsterdam asked the Ministery of War to provide military back-up, they went hard in and “restored order”. But to a price of 5 dead, dozens of wounded and over a hundred arrests. The feel of threat and danger in the boys head and body, became part of Lucebert's paintings and poems.

We would like to point out a line in Lucebert's poem Verdediging van de 50-ers - for: Defence of the 50-ers:

Rapalje for Rapaille, the Dutch word for collective / corporating rabble, our simple translation: against your wall we swell with the scum to a bladder, a heavy bag of laughter, cramps screaming and roaring your heaven is overloaded with our swearing experience

paintings on canvas, big and small, and gouaches by Oskar Lens

provenance: the private collection of Mr. Jaap Harten, The Hague, The Netherlands

acquired by Delta 98 Den Haag, The Hague, The Netherlands

- for more paintings by Oskar Lens, please scroll down to the bottom of this page -

a collection of 25 works by Gerard Fieret (The Netherlands, 1924-2009) a Dutch photographer, artist, painter, performer, poet

and known as De Duivenman - The Pigeon Man

all with their original transparant acrylic show case, prices on request

some more paintings and gouaches by Oskar Lens in the collection of Delta 98 Den Haag, The Hague, The Netherlands: